LAST CHANCE FOR SA EXPATRIATES TO COME CLEAN WITH SARS

South Africans living or working abroad can no longer avoid the long arm of SARS. Under pressure to meet its revenue quotas, the tax authority has started auditing the country’s non-compliant expatriates in earnest.

“We have been warning expatriates that this was coming and now that it’s here, the time for hiding one’s head in the sand is over,” says Jonty Leon, Legal Manager (Expatriate Tax) at Tax Consulting SA.

He advises those intending to relocate to another country to follow the formal exit procedures and, most importantly, ensure their tax affairs are in order beforehand. He also advises that those that have already left permanently, should ensure that they have done so in a compliant manner, and have had themselves noted as non-resident for tax purposes.

Gone, but not forgotten

Whether a South African must declare their worldwide income and pay tax on it to SARS is determined by their tax residency status, not their physical location or period outside the country. Leon states, “Tax residency of South Africa is not determined solely on the amount of time spent in the Republic, this is a far more complex issue which must be technically dealt with in terms of the law.”

The safest route to remove ambiguity on tax residency status is to follow the formal financial emigration process. This process is being changed and a new more stringent regime will be implemented from 1 March 2021.

This may come as a shock to those who believe that, once they set foot on foreign soil, they are free from any further tax obligation to South Africa. More so for those who left the country without settling their tax debt, even if they have been gone for decades.

“With stricter legislation to back its efforts and an emerging system of global financial data sharing as wind in its sails, SARS is more than capable of detecting taxpayers who historically flew under its radar,” says Leon.

According to Leon, several warning signs arose over the past year.

The first was changes to the expatriate tax laws that came into effect on 1 March 2020, soon after SARS launched its dedicated Foreign Employment Unit, which is focused on South Africans working abroad.

The second warning was the announcement that the current financial emigration law would be amended, which in the past has been successful in confirming with SARS and SARB one’s non-resident status. The change will inherently make it more difficult to cease tax residency and with a new and, as yet, undisclosed replacement process on the horizon, there has been a massive influx of applications to beat the deadline.

The third sign was the removal of the term “wilfully” from the Tax Administration Act when dealing with non-compliance, giving SARS greater leverage to prosecute anyone claiming negligence when failing to meet their tax obligations. This is in line with the reasoning for the change in the expatriate tax legislation previously, where the rife tax non-compliance of South Africans abroad was noted during Parliamentary sessions in August 2017.

Leon says South African expatriates and those wishing to emigrate still have several options available to them.

For one, they can urgently apply for financial emigration until March 2021. “National Treasury confirmed that applications submitted prior to that date will be processed under current legislation,” he says.

They can also take advantage of any double tax agreement between their chosen country and South Africa. As the tax implications of such agreements vary between jurisdictions and the fact that these agreements do not apply automatically to the taxpayer, they should seek advice from an expatriate tax expert.

Above all, if an expatriate is not tax compliant, they can approach SARS under the Voluntary Disclosure Programme to pay their back taxes along with interest and penalties but without prosecution. This process must also be undertaken very carefully, as specific requirements must be met.

“SARS has the advantage now, so waiting to see what happens is a course of action I do not recommend,” says Leon. 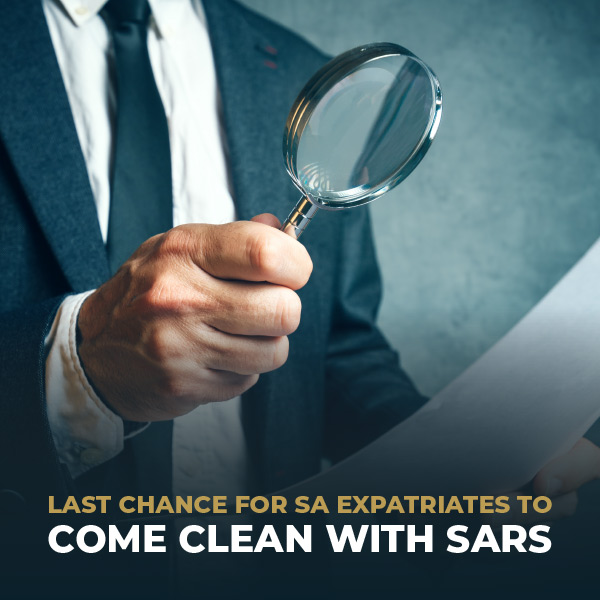 NEWS | SARS IS AWARE OF YOUR OFFSHORE ASSETS

Visit the Government Portal for the latest updates on COVID-19.
+
Scroll to top