Having just returned from visiting South Africans in remote locations in the Democratic Republic of Congo, Zambia, Oman, Qatar, Saudi Arabia and the UAE, one gains an appreciation for expatriates living in these locations.

Some countries were not even accessible to us due to health and security reasons, such as Iran and Iraq, yet many South Africans find themselves working in these difficult environments. The expatriates in these regions typically work on a rotational basis, the same as those on oil rigs, ships or any other basis of rotation. A typical scenario is where they work 6 weeks outside and have 2 weeks R&R or “rest and recuperation” where they can return to their families in South Africa. They all have their reasons for this mode of life, which are varied and with no one-size-fits-all. It would be incorrect to stereotype them, as they come from all South African backgrounds, genders, ages and diverse qualifications.

The one thing they have in common is that they work away from their families, in circumstances and difficulties not easily explained to someone who has not experienced it themselves. This hardship allows them to provide for their families and  serve our economy by sending money home. Also, they are the most vulnerable to the new ‘expat tax’ which commenced on 1 March 2020; as doing ‘financial emigration’ or claiming tax relief under a double tax agreement is not possible for them. They cannot do ‘financial emigration’ as South Africa remains their main or real home, nor do they qualify for double tax relief, as they have a permanent home available in South Africa and South Africa remains their center of vital interest.

Minister of Finance, Tito Mboweni, announced in his budget speech on 26 February 2020 that Government will increase the cap on the exemption applicable to foreign employment income earned by South African tax residents from R1m to R1.25 million per year from 1 March 2020. This was welcomed by many, but the more astute have quickly computed that this barely makes up for the weakening of the South African Rand against the United States Dollar.

The build-up to what should have been an extra pond of revenue collection has seemingly backfired, and the increase of the exemption cap indicates Government’s attempt to persuade South Africans working abroad against cutting their ties with South Africa. The underlying message translates to “please remain a South African tax resident so that we can tax you”. This will cause an accelerated exit of South Africans before the exchange control regulations of emigration is abolished and a new and uncertain policy regime takes center stage, which has been formally announced as being a ‘more stringent verification process’.

Where there was any degree of understanding the plight of rotational expatriates, the tax relief would not have been extended with R250,000; from R1m to R1,25m; but the taxation of fringe benefits would have been addressed.

The real critical issue for these expatriates’ centers around the so-called ‘fringe benefits’ they receive when working on site or remote location. Let’s be clear, these are not genuine fringe benefits for anyone who has visited these locations; yet they are defined as fringe benefits under tax law. Thus, whilst economically there is no benefits being provided, the expatriate will be fully taxed on items such as accommodation, security, vehicle, drovers, medical facilities, evacuation and other insurances and flights home.

National Treasury and SARS are acutely aware of these benefits and they know that expatriates were pleading for an exemption on various benefits, yet none has been announced and will clearly not be given. This is the one area where an understanding of the expatriate plight could have been shown.

Where does this leave the breadwinner and their families?

The Budget Announcement clearly showed focus on South Africans abroad have, which categorically confirms that they rank high on the radar of SARS. They know there are new taxes to collect with the new law change and they also know many expatriates have been non-compliant and have not actively done much to address their tax position with SARS. Traditionally, employers would take the lead in ensuring a fully compliant, yet optimally planned tax position, but rotational South Africans are often working on fixed term agreements for foreign employers. Some key take-aways from most expatriate group interactions: 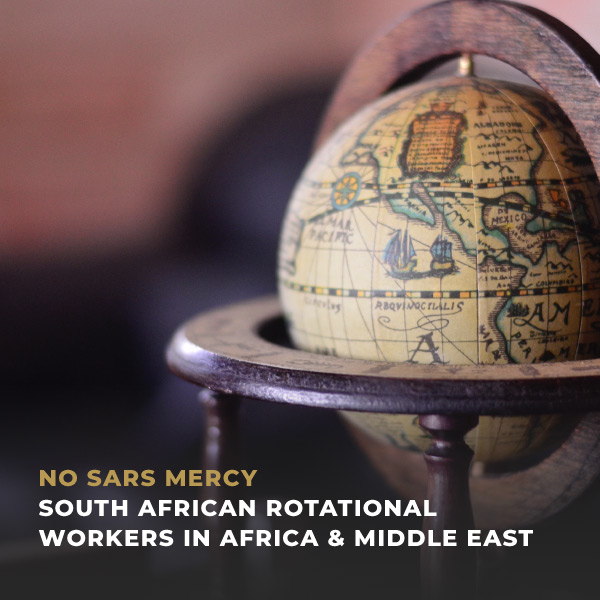 More News
NEWS | SARS PROSECUTION UPDATE – ARE WE ON THE RIGHT TRACK?