SARS PROSECUTION UPDATE – ARE WE ON THE RIGHT TRACK?

At the 2019 Tax Indaba, the Commissioner for SARS declared that non-compliant taxpayers will no longer be allowed to operate unchecked and can expect to face criminal prosecution. At the time, some may have scoffed at the Commissioner’s promise, but recent developments may force his detractors to re-evaluate the situation.

There is, however, a question on whether the current strategy is the correct one and will start getting taxpayers to regain a respectful fear for SARS; which is really the sweeping change we need.

Since the Tax Indaba, we have seen SARS score several victories, but SARS’ media page over past month in particular paints the picture of a revenue authority that should not be tested –

SARS’ overall objective is quite obvious; it wants to galvanise voluntary compliance across the tax base by making examples of delinquents, thereby striking fear into the hearts of taxpayers. Truth is however, SARS may have embellished their recent wins if we consider the following –

Where should SARS aim its crosshairs?

SARS’ strategy is a good one, but there is an argument to be made that it is directed at the wrong segment of the tax base. SARS is not losing out on a lot of revenue from the Mark Lifman’s of this world. Returning to the topic of employers not paying over PAYE, SARS is losing out on collections from the mere mortals, those taxpayers who perhaps used to be compliant, but as SARS lost its deterrence factor, they found it too easy not to pay their taxes.

Perhaps a leaf can be taken from New York’s crime reduction through “get-tough” policies; the aggressive policing of lower-level crimes. Dubbed the “broken windows” approach to law enforcement, small disorders lead to larger ones and perhaps even to serious crimes. The then mayor of New York, Rudolph Guiliani told the press in 1998, “Obviously murder and graffiti are two vastly different crimes. But they are part of the same continuum, and a climate that tolerates one is more likely to tolerate the other.”

SARS needs to make examples of this segment specifically; it should go after companies, directors and public officers who fail to pay over PAYE. In the same vein, taxpayers who do not declare rental income or who use offshore trust structures to evade taxes must be seen to receive similar sentences to the ones SARS boasted about in the media. There are no published cases of Panama Papers, Common Reporting Standards or those implicated in State Capture or other commissions of inquiry.

Prosecution of notorious delinquents is not relatable for the man on the street; we need a message that says no one will be spared, one that hits home. When this message carries through, we will see taxpayers taking up the Commissioner on his invitation to come clean. 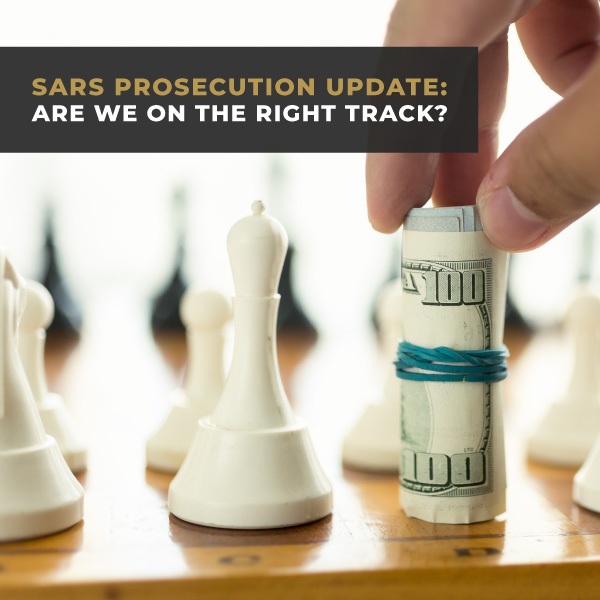