WHAT TO EXPECT IN THE UPCOMING BUDGET?

On the whole, these Acts have not brought about any controversial changes, nor have they provided taxpayers with any substantial relief. Most importantly, they did not bring about any amendments that would drum up much-needed additional revenue.

With a growing deficit on revenue collection as it stands, coupled with grim prospects of economic growth and some very hungry SOE mouths to feed, where will the fiscus get the money? With this in mind, should taxpayers be concerned about the upcoming budget speech?

A repeat of the old chronicle where the legislature looks to the wealthy by increasing tax rates, especially those applicable to “wealth taxes”, is unlikely to do the trick. It is also unlikely that we will see a “new” tax, or at least this will be an ambitious strategy given the administrator’s existing difficulties with enforcement.

Absa, for one, predicts that the Minister of Finance will announce a further increase in VAT to 16%. This would likely be the most effective change to see a meaningful increase in revenue. To provide some perspective, in 2018, when the VAT rate was increased for the first time since the dawn of democracy, National Treasury introduced several other proposals to increase revenue collection. In addition to an increase in the VAT rate and fuel levies, “wealth taxes” such as donations tax, estate duty and ad valorem taxes were increased as well.

It was projected that these proposals would generate an additional R36 billion in revenue, of which a whopping 80% was attributed to the VAT rate increase. Conversely, the increase in “wealth taxes”, which was arguably introduced to deflect from the controversy around the VAT issue, contributed a meagre 3.27%.

Pragmatically, another VAT increase is where National Treasury should be looking, but from a political perspective, this would be a very tough decision. Given the massive wealth gap in our society, together with the fact that VAT is, arguably, a regressive tax, the increase in VAT in 2018 triggered a backlash from several camps. Many argued that National Treasury could have scratched elsewhere to make up the shortfall, none other than the wealthy. As such, even if it knows that this would be the most sensible option, it is difficult to see National Treasury repeating its unpopular decision so soon after its ostensible betrayal of the poor in 2018.

Perhaps there is a belief that the new “expat tax”, effective 1 March 2020, will ride to SARS’ aid by bringing in a big chink of additional revenue. If this is the case, although this would be hopeful at best, then maybe National Treasury can opt for its standard recipe of rate increases aimed at the wealthy, allowing it to leave the VAT rate unchanged, at least for now. 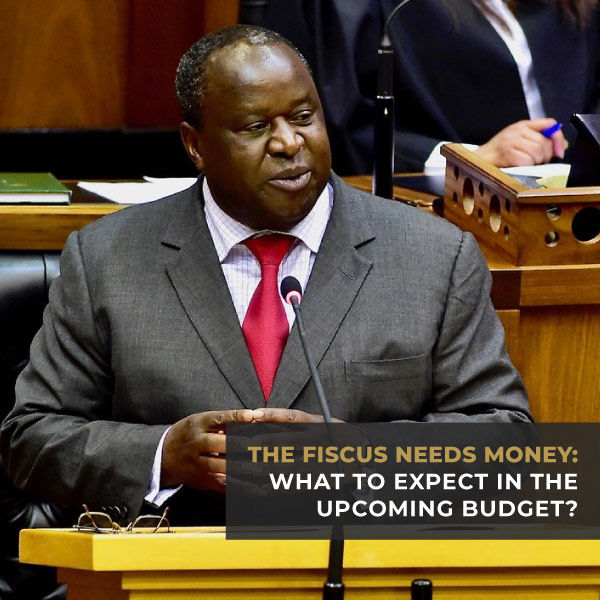 PRINCIPAL OFFICERS MAY NO LONGER BE APPOINTED BY SERVICE PROVIDERS, SAYS FS...