Feedback on Parliament Submission of 29 August 2017

You are here: Home1 / Latest News2 / Feedback on Parliament Submission of 29 August 2017 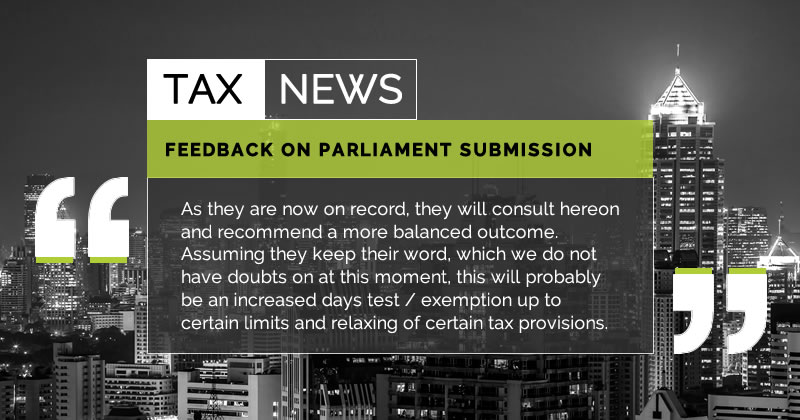 Following the submission to Parliament yesterday, herewith an update on the events of the day and how this unfolded, including next actions and what you may expect.

The initial presentations were done by PWC and then the South African Institute of Tax (SAIT), who both pointed out problems with the expatriate exemption being repealed. SAICA, next, we found strangely, indicated that they do not have a principle problem with the change, so this came as quite a surprise. SAIPA did quite a detailed submission on the problems with the change. A discussion followed and whereby the exemption proposal was given fuel by the DA who indicated that the principle of economically paying no tax is a problem. This was supported by the ANC and EFF. Even at Parliament level there was confusion as to tax on citizenship and tax residency. Professor Keith Engel, CEO of SAIT, then did a remarkable job in explaining some of the policy problems with what is being proposed, rebutting the adverse tide at that stage. Carel Gericke, head of tax on MTN and one of the strongest corporate tax minds in South Africa also stepped in to support the group’s cause and made well placed comments on the impact on costs for corporates and competitive consequences for South African corporates. Barry Pretorius and myself deliberately held back during this phase. Next was BASA, Capitec, Law Society and Webber Wentzel, who did not deal with the expatriate matter.

We adjusted our presentation to make the points we believed were crucial at that stage. My presentation specifically explaining why this law change (a) adversely impacted the ability of South Africans to gain overseas work experience (b) the fact that South Africans are being driven away by this proposal and (c) the technical items on taxing of fringe benefits, double tax treaty relief and compliance costs, (d) cost of living etc. These are discussed in our technical submission which is available on the website and Expatriate Petition Group page. The points appear to have been well received.

Barry Pretorius was next and especially his personal experience and examples hit home. He made it very clear that expatriates are being driven away and challenged why no other expatriates world-wide are being targeted by the same legislation. The video recording of his submission shows exactly how well he has done.

My interpretation of their views are as follows –

As National Treasury conceded to problems with the proposal, my response was swift and thanking them for hearing our concerns, allowing consultation. Barry Pretorius then provided a very strong rebuttal and the chairman afforded him to well overstep his allocated time, a privilege not bestowed on anyone else. This was also recorded.

Punted by many as the person who should have been the next Minister of Finance, he competently steered the discussion and the group owes him a word of gratitude. There are specific points, however, which should be emphasised –

My personal view is that this was very successful. Plenty of small details are being dealt with herein, but to get National Treasury and SARS to re-think their draft law is rarely done and as we have seen with E-Toll / SANRAL, they do not like changing course.

As they are now on record, they will consult hereon and recommend a more balanced outcome. Assuming they keep their word, which we do not have doubts on at this moment, this will probably be an increased days test / exemption up to certain limits and relaxing of certain tax provisions.

The message, however, is also that the complete expatriate exemption of the past will be no more and every expatriate should make sure their record is compliant and that they have properly exited where their intention is to become non-resident.