The Pretoria High Court granted on 14 July 2020, a small business owner, on an urgent basis relief against the South African Revenue Service (SARS) who depleted the taxpayer’s bank account without following due process. The court ordered SARS to set aside the third appointment of Absa who collected R1.3m on behalf of SARS from the taxpayer’s bank account in terms of Section 179 of the Tax Administration Act (TAA).

The Court further ordered SARS to repay the amount collected from the taxpayer’s bank account together with the costs of the application on a punitive scale within three business days after granting the order. This occurred shortly after the SIP Project Managers vs SARS Commissioner whereby the court ruled against SARS in respect of third-party appointments to collect outstanding tax debts.

In this case the taxpayer was left with a frozen and empty bank account without any prior notification from SARS. When he realised SARS had collected the full balance of his bank account, he immediately contacted his tax advisor to enquire about his tax compliance. Tax Consulting SA engaged with SARS, advising them of the situation and what detrimental financial effect their conduct has had on the taxpayer where it was apparent that there was no tax debt. The taxpayer had already closed two of his three shops in Johannesburg due to the collection proceedings.

SARS undertook to investigate the matter but there was no sign of a quick resolution to the issue. Due to the urgency of the matter the taxpayer instructed Huang Attorneys Inc to approach the Pretoria High Court on an urgent basis. At the time of urgent application and prior to the third-party appointment by SARS, the taxpayer’s affairs for both Income Tax and Value Added Tax (the only two taxes he was registered for) were fully compliant. In fact, it materialised that SARS owed the taxpayer a nominal amount. Huang Attorneys argued that the court should set aside the third-party appointment of Absa to collect the amount from the taxpayer’s account and for SARS to repay the amount taken from taxpayer’s account. SARS did not oppose the application and was advised that the order has been granted by the court.

In these difficult fiscal times, SARS is expected to exercise its considerable power to collect the correct amount of taxes to the benefit of the fiscus. However, this does not mean that rogue officials can act outside the law and appoint banks as collection agents, as they see fit. There are clear rules that must be followed, and this is to the benefit of society as a whole, which requires efficient revenue collection, but not abuse of SARS power.

In terms of the TAA, the taxpayer has to be notified of any outstanding debt and the subsequent appointment of a third party, such as his bank, to collect the tax if no action is taken by the taxpayer to regularise their tax affairs. If SARS does not properly issue the final letter of demand it is precluded from taking collection steps in the normal cause. It is a peremptory requirement in the TAA for SARS to issue a final letter of demand to the taxpayer, ten (10) business days before SARS can appoint a third party to collect outstanding debt and this was recently also confirmed in SIP Project Managers-judgment.

It is imperative that a taxpayer ensure that their rights are protected, especially during the unprecedented times of COVID-19, where we have seen that SARS has adopted a firmer position in collecting outstanding debt.

The Commissioner cannot be pleased with the conduct of the SARS officials involved and it remains anyone’s guess whether this is a system error, which may have resulted in a large number of unauthorised collections through banks, or only a SARS official who is “one bad apple”.

There remains an unbalanced position in our tax administration law, which does not allow SARS officials to be held accountable for their action. The Tax Ombud’s powers are restricted, as can be seen from their latest report where SARS appears to have flat out refused the Ombud to interview the implicated SARS officials. It is also unclear whether the Commissioner is taking action against his officials internally.

For now, a taxpayer’s only remedy appears to approach the High Court for relief. The Pretoria High Court has in both matters before Acting Judges Lingenfelder and Avvakoumides, respectively protected taxpayer’s Constitutionally enshrined rights against SARS. 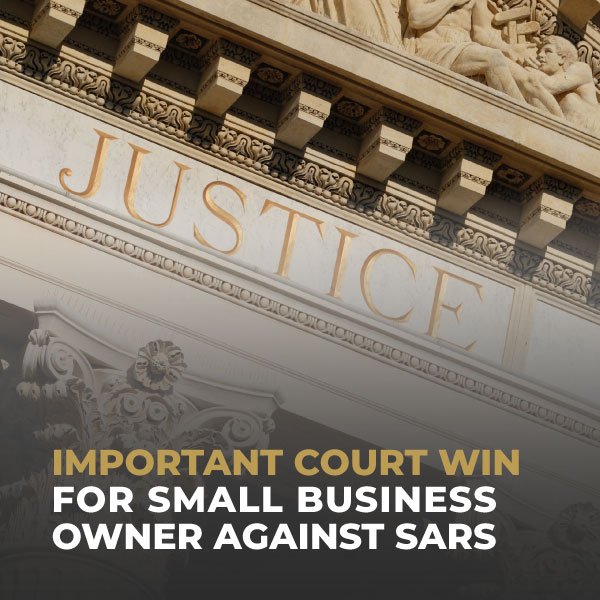 NEWS | WHEN SARS UNLAWFULLY HELP THEMSELVES TO YOUR BANK BALANCE