Talk about bad timing. The Constitutional Court on 21 July 2020, after some 250 days of deliberation, decided that the way in which many franchise operators have been claiming their tax expenses does not rank for tax relief. SARS must be extremely pleased with the win, only the 4th ever tax related judgement delivered by the Constitutional Court since its inception. However, the harm to our franchise industry may be severe and those who survive the Covid-19 pandemic will now also have to face SARS.

The decision in Big G Restaurants (Pty) Limited v Commissioner for the South African Revenue Service [2020] ZACC 16, concerns a company that operates various restaurants in terms of written franchise agreements concluded with the Spur Group. The tax court agreed with the taxpayer that tax relief should be given, the Supreme Court of Appeal agreed with SARS and now, the Constitutional Court handed SARS the final win.

Why is this bad news for taxpayers, especially the franchise industry?

Most franchise agreements are standardised agreements. Thus, if Spur Group got their agreement “wrong” on this tax position, all their franchisees will be in the same boat as Big G Restaurants, who have claimed certain expenses incorrectly based on this agreement. Similarly, where this is a common practice amongst all Spur Franchisees, this will make easy SARS pickings. Spur is also one of the longest running and most successful franchises in South Africa. One would anticipate that many other franchises are operated on similar terms, so the technical and practical mischief may very well also be found in their agreements, accounting records and tax filings. The question will come down to how hard SARS will investigate everyone and enforce this Constitutional Court judgement on probably a fact similar industry.

But why is this bad for taxpayers in general? The tax court gave a very well-written judgment, even acknowledged by Constitutional Court judge Madlanga. Yet, despite the praise, the Supreme Court of Appeal’s position was upheld. The judgment shows that our courts are still deciding tax matters on technicalities, so even where you seek to achieve a deliberately designed tax treatment, if your agreements are incorrect and as a result you cannot discharge your onus of proof, SARS wins.

What is the principle involved?

The question before the court relates to section 24C of the Income Tax Act, which allows taxpayers to claim deductions in respect of future expenditure incurred against income that will be utilised wholly or partly to finance said expenditure. The critical requirement to utilise this provision is that the expenditure and the income against which the deduction will be made must be in terms of the same contract.

As a franchisee, the taxpayer argued that it ought to be allowed to deduct from its income the future expenditure it had to incur under the franchise agreements concluded with Spur, such as to upgrade and refurbish its restaurants in line with the brand and image of Spur restaurants. The Constitutional Court, however, dismissed the taxpayer’s appeal and ruled that the franchise agreements and the agreements with the restaurant’s consumers for the sale of food are not sufficiently linked to bring the expenditure within the confines of section 24C of the Income Tax Act. It may be noted that normally you would claim section 24C only when you had an income, but the matching expense was to be incurred in future.

Big G tried to claim those future “upgrade or refurbishment” expenses that franchisees dread the most, and which they factually have to incur. However, the position is now confirmed in law that you can only claim these future expenses once you have actually suffered that expense. On the agreements and facts, it was found that their claim did not meet the section 24C requirements.

Unlike the preceding three tax matters, this case was not brought before the Constitutional Court to answer a constitutional question, but rather because the matter raises an arguable point of law of general public importance. This potentially contributed to the delay in delivering the judgment.

In determining if it had jurisdiction to entertain the matter on these grounds, the court acknowledged that this franchise agreement would hardly be unique, and that Spur franchises are particularly common across South Africa. On this basis, the Constitutional Court found that this matter involves a point of sufficient general public importance, as “a determination of the contested issue is likely to affect Spur Franchisees throughout South Africa. The issue transcends the narrow interests of the litigants and implicates the interest of a significant part of the general public”.

It is interesting to note that two of the Constitutional Court judges found that the matter should not be heard as tax is not of public interest; however, they have not given any reasons for holding such views. Rather, they noted that they would anyway on merits have given SARS the win, if the case had the necessary jurisdiction.

By chance, this judgment comes a day after Spur’s CEO of 24 years, Pierre van Tonder, announced his retirement. The timing of his retirement and delivery of the judgement is perhaps too co-incidental. One can only speculate if this judgment had any bearing on the decision, but the timing is peculiar.

The judgment again illustrates the importance of possessing an intimate understanding of not only contractual principles when drafting an agreement, but also the tax implications that would flow therefrom.

Our jurisprudence has shown time and again that where a contract is not drafted with an integrated understanding of all the applicable legal fields, the parties often end up paying the price. Parties who choose to make agreements without an understanding of the tax implications in particular may set themselves up for a nasty surprise down the line.

Where you inadvertently find yourself in a position of non-compliance, the SARS VDP process is specifically designed to remedy your tax affairs with minimal tax cost and legal consequences. 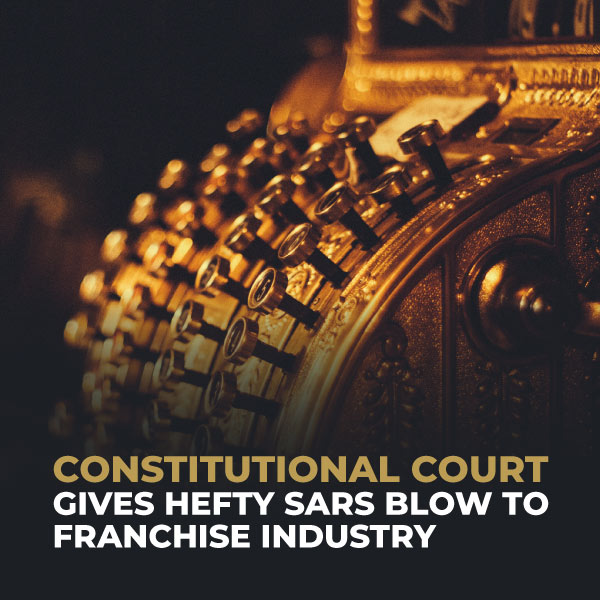 NEWS | PROVISIONAL TAX: PENALTIES AND INTEREST RISKS
Visit the Government Portal for the latest updates on COVID-19.
+
Scroll to top