A LANDMARK VICTORY FOR SARS OVER OBSTRUCTIVE TAXPAYERS

As South Africans, we have borne witness to certain high-profile individuals adopting what is referred to as the “Stalingrad Defence” in litigation, in an effort to postpone their day of reckoning at all costs. This strategy involves building a legal defence – not on merit – but one where you frustrate your opponent to the point where the juice is simply no longer worth the squeeze.

In South Africa, this strategy can be very successful, especially where you have the luxury of litigating on the taxpayer’s dime. However, Cart Blanche Marketing CC and two others v Commissioner for SARS (case No: 26244/2015) demonstrates that perhaps this is not a strategy that one ought to use against SARS.

This case revolved around SARS’ decision in terms of section 40 of the Tax Administration Act No. 28 of 2011 (“TAA”) to audit the taxpayers in question. The taxpayers sought to review and set aside SARS’ decision on the basis that: the decision to audit them was made with an ulterior purpose; it was taken for a reason not authorised by the TAA; it was irrational; and it was taken in bad faith. SARS held that the decision in terms of section 40 did not constitute reviewable administrative action and, even if it did, the decision was lawful.

It serves to note that, in terms of the judgment, the taxpayers are affiliated to a group of companies that have been involved in court proceedings with SARS since 2004, with 11 ongoing cases before the Gauteng Division (Pretoria) of the High Court. The engagement with the taxpayers in this instance was equally acrimonious. On 4 August 2014, SARS notified the taxpayers that they had been selected for and audit, calling on them to make certain records available, but the taxpayers refused to provide any documents to prove their compliance.

Instead, when SARS issued its audit findings on 18 February 2015 and informed the taxpayers of its intention to make additional assessments, the taxpayers resorted to litigation; launching an application in the High Court to review and set aside the earlier decision to audit them.

The decision to audit the taxpayers

This was the focal point of the dispute. The taxpayers averred that there was no income tax risk pertaining to them specifically. In support of this contention, the taxpayers maintained their tax affairs were in order, as evidenced by among others the tax clearance certificates issued by SARS.

The SARS officials who made the decision cogently countered these assertions; while the suspicious activities related to different entities, SARS has found in general that where taxpayers fail to comply with one tax Act, they almost invariably do not comply with other tax Acts. Importantly, the official explained the principle can be extrapolated to the owners of a company. If the company is non-compliant, so too are the owners. The ostensible non-compliance of the affiliated entities and common shareholders thus established the income tax risk that prompted the decision to audit the taxpayers.

The SARS official also swiftly dealt with the tax clearance certificates and explained that such a certificate merely confirms the taxpayer has no outstanding returns and the taxes declared in the returns submitted have been paid. It does not constitute any proof that the taxable income was correctly determined and declared.

Initially, the taxpayers sought to have the decision reviewed in terms of legality as well as under the provisions of the Promotion of Administrative Justice Act No. 3 of 2000 (“PAJA”). But, for the decision to constitute reviewable administrative action, it had to have adversely affected the taxpayers’ rights and it had to have a direct external legal effect. As this was not the case, the taxpayers abandoned their reliance on PAJA and the matter proceeded on the basis that it was brought as a legality review only.

This is critical for SARS. If it was found that the decision to audit the taxpayers constituted an administrative action reviewable under PAJA, it would have created a perilous precedent for SARS; it would have opened the door for vexatious taxpayers to call on SARS to give reasons whenever they are selected for an audit.

In any event, the court proceeded to consider the matter in terms of legality. In doing so, the court first interpreted section 40 of the TAA and found that the wording, context and purpose of this section suggests that, provided the intended audit is to be undertaken for the proper administration of a tax Act, there is no limitation to the considerations on which a decision to select a taxpayer for audit is to be founded. In considering what was sought by SARS in this case and for what purpose, the court found every enquiry directed at the taxpayers was relevant for the administration of the Income Tax Act No. 58 of 1962. On this basis, the court found the decision was lawful and the taxpayers’ application was dismissed with costs.

In general, SARS has an aversion to litigation, but this case shows the institution’s resolve where it comes to matters of principle. Whether the litigation proceedings in this case was a manifestation of Stalingrad tactics cannot be gleaned from the judgment alone. Section 33 of the Constitution guarantees the right to just administrative action and taxpayers do have the right to challenge the administrator where its conduct does not meet the prescribed standard.

In saying that, it is curious that the taxpayers resorted to litigation instead of participating in the audit proceedings, especially in light of section 42 of the TAA which caters for a procedurally fair audit process. SARS certainly made its views quite clear in a media statement, published shortly after judgment was delivered. In the statement, the Commissioner celebrated the victory and noted that this case was the embodiment of a determined effort to thwart SARS from carrying out its work lawfully.

Nevertheless, the judgment marks an important triumph for SARS for two reasons: first, taxpayers cannot use (or abuse) review procedures to stifle SARS in an audit, and secondly, it sends a message that SARS will not be undone by dilatory tactics employed by obstructive taxpayers. 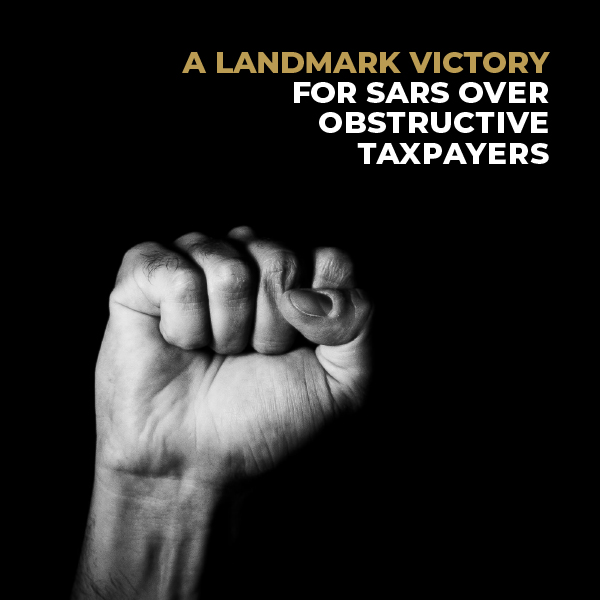