FEW OPTIONS AVAILABLE TO GET SA OUT OF ITS ECONOMIC PIT

Finance Minister Tito Mboweni is facing his own crisis. He will be delivering South Africa’s – probably first – emergency budget in the wake of a massive economic decline.

The only time any economy experienced such a dramatic decline was during the two world wars. Commentators are concerned that the current health crisis could put the economy back to the level it was in the 1960’s.

Tax collection issues only tip of the iceberg

The SA tax base is vastly shrinking and revenue is particularly lost in the areas where most of the tax collections come from. Tax from individuals, companies and Value Added Tax (VAT) are the three largest contributors to total tax revenue.

Even before the Covid-19 pandemic hit SA unemployment was rife, businesses were failing and people were not consuming all which left a large dent in government’s purse.

The current health crisis has exacerbated the situation beyond most South Africans’ imagination. The lockdown saw struggling businesses closing their doors, people accepting large pay cuts and consumption grinding to a halt.

The subsequent ban on the sale of alcohol and tobacco products further led to a massive decline in excise revenue. The February budget simply is no longer applicable.

In February the estimated revenue shortfall was around R63bn for the 2019/20 tax year. The estimated shortfall is now almost an astronomical five times bigger. Hence, the need for an emergency budget.

The elephant in the room: wealth tax

It is quite possible that if the economy does not miraculously shoot out of this slump very quickly that we may experience even bigger losses over the next two years.

Mboweni’s options have never been so limited. He may try to raise taxes, but it will be near impossible for the South African Revenue Service (SARS) to collect it in the current climate.

The notion of a wealth tax has been tabled many times, without much success. But this may gain new traction in these extraordinary times. Some have floated the idea, albeit in the context of redistribution of wealth, that an “inheritance tax” should be introduced, where individuals would forfeit their estate to the government. A perhaps equally controversial idea that have emerged is the mobilisation of private pensions to drive economic growth. Both initiatives will signify watershed moments in terms of government policy and will no doubt be very unpopular in many quarters.

Government will have to be careful not to make decisions that will lead to some of its subjects leaving the country and taking their wealth with them. A good example of this was the introduction of the “expat tax”, which prompted many South Africans to cut their ties with the country permanently. Some form of wealth tax, or the idea that private pensions will be mobilised by the government may result in a further exodus of an important segment of the tax base, or at the very least individuals will move and accumulate their wealth offshore, which will render these policies self-defeating in the long-run.

What other options does Government really have?

Issuing government bonds (where government borrows money from is citizens and pays them interest on the investment) is an option, but not a very viable one.

Few people are in any position to make additional investments at this juncture. Even if they were, they may be extremely cautious of future government policies.

There have been some very loud calls for government to nationalise important sectors in the economy. Hopefully, this crisis is not used as the veneer for doing so.

It is now more vital than ever that policy decisions are focused on efforts to stimulate the economy.

Many South Africans have hoped and even expected that the Covid-19 health crisis would force government’s hand to allow failing state-owned enterprises to sink.

It is therefore difficult to understand how government can morally justify spending R21bn on a new SAA when the old one has failed spectacularly and the country is facing a potential revenue deficit of R285bn.

If Mboweni wants to install some confidence in government and its ability to get the country through this pandemic, he should announce pay cuts in the public sector.

This appears to be the only sector in the entire economy that has not been affected by the pandemic. There have been no pay cuts for public servants or any retrenchments, even though it is generally accepted that the public sector and its wage bill is grossly bloated.

The demand for above inflation wage increases in the public sector is leaving an extremely bitter taste in the mouth of many who are struggling to make ends meet. 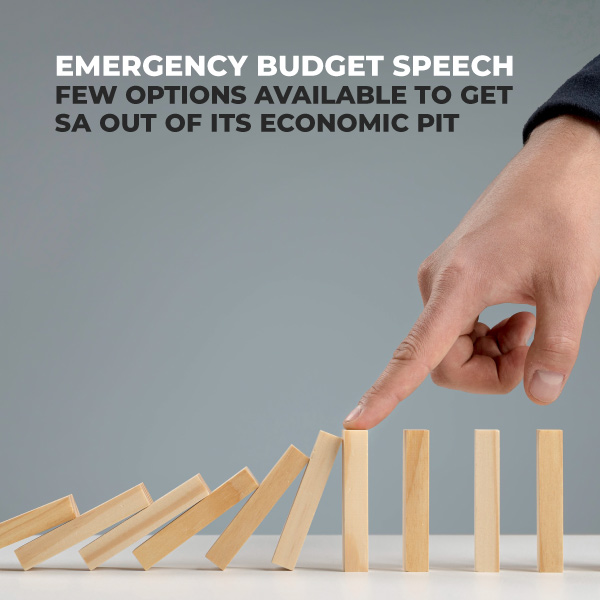 NEWS | THE NEW TAX CASE ALL SOUTH AFRICANS SHOULD KNOW ABOUT