Having just returned from visiting South Africans in remote locations in the Democratic Republic of Congo, Zambia, Oman, Qatar, Saudi Arabia, UAE etc; I have gained a deep appreciation and admiration for South African expatriate living. Some countries were not accessible due to health and security reasons, such as Iran and Iraq, yet many South Africans find themselves compelled to work here, as this is the only means of supporting families back home. These are all special individuals, from all backgrounds and segments of society; in many ways representing the best South Africa has to offer and no doubt one of our most undervalued exports. They make unspeakable sacrifices to support their families back home, yet they take their plight in a typical South African ‘getting things done’ manner. All over Africa and the Middle East they are respected and welcomed for their professional skill and approach and I have personal appreciation for each of those who have shared their story and made us feel so welcome.

Back home, there has been plenty written by the informed, and not so informed, on the 01 March 2020 expatriate tax. Some commentators have advanced that it is a good thing that they should pay South African tax. On the other hand, many tax practitioners have advised that you simply need to ‘tick a box’ on a tax return to escape the tax, financial emigration has been punted as a sure means of discharging your evidential burden of breaking tax residency and, perhaps the most classic escape advocated, the mere existence of a Double Tax Agreement where you work means that this tax cannot apply to you.

What is the residency status of the taxpayer?

This is a concept which, surprisingly, many taxpayers and tax practitioners struggle with. Whilst this article will not seek to replicate very good examples of interpretation of the law hereon, as contained in SARS Interpretation Notes 3 and 4; it may be noted that the days’ test is almost always irrelevant where the taxpayer is ordinarily resident in South Africa.

Where a taxpayer is tax resident in both South Africa and a foreign jurisdiction, and there is a Double Tax Agreement with the other country; the Double Tax Agreement overrides South African domestic law. This override is, quite uniquely, incorporated in the definition of “resident” as defined in section 1 of the Income Tax Act; but I will leave this for the tax technocrats to debate.

The analysis of the tie-breaker clause can fill up a chapter in a textbook by itself, so will not be discussed today. What is important at a practical level, is that the applicability hereof is a mute item, where the taxpayer cannot pass some basic tests. Explained differently, the types of taxpayers we are dealing with, by the very nature of their duties and mode of life, will normally not qualify for the Double Tax Agreement relief.

This means the expatriate tax 01 March 2020 will mostly apply to them. Coupled with the types of benefits they receive, concomitant to the nature of their employment services; this is a high-risk area of tax filing, for both the tax practitioner and expatriate themselves.

The following categories may broadly be defined –

There are many expatriates who accept the sacrifices of expatriate life, to have enough money for retirement in South Africa. Thus, they accept the incredible sacrifice for a period, to ensure they have enough to retire and would not burden the state. They normally rotate back to South Africa and often already have a home here, to which they plan to retire. This category will probably be one of the hardest impacted by the expatriate law change, effective 01 March 2020 onwards.

The expatriates in these regions typically work on a rotational basis, the same as those in the mining, construction, oil rigs, ships or any other basis of rotation. A typical scenario is where they work 6 weeks outside and have 2 weeks R&R (“rest and recuperation”), where they can return to their families in South Africa.

They will all be directly impacted by the expatriate tax, especially the fringe benefits offered to them will cause a significant tax hardship; even though they do not get any economic benefit from these ‘deemed’ tax benefits. To name some examples, the transport, personal safety and security provided, accommodation fringe benefits etc. comes to mind, which will be a minefield for these expatriates and their tax practitioners to navigate. There are special exemptions on certain benefits, but this remains a highly specialised area of tax.

Attractive salaries lure skilled South Africans to take up employment on vessels and private yachts and as promising as this lifestyle may look, it is challenging from both a physical and mental perspective. On social media one always sees the luxury lifestyle of these expatriates working on cruise liners or private yachts, but no one ever sees the long working hours, small living arrangements and endless weeks on international waters away from their homes and families. In most circumstances this is all but a smooth sailing experience.

The seafarer exemption in section 10(1)(o)(i) has not been changed, but this finds very limited application in practice. By far the majority of expatriates who are seafarers or who perform related work thereto; does not meet the requirements of the seafaring tax clause. This means they fall under the normal tax regime in South Africa and are treated as normal expatriate employees.

They can seldomly claim non-residency, as due to their mode of life they are not resident anywhere else and effectively live on ships and return to South Africa during breaks.

The Barry Pretorius initiated Facebook “Tax Petition Group” did a remarkable lobby to turn a complete abolishment of the expatriate tax exemption, into the section being retained, but with a R1m tax limit. This was a significant concession, showing most of the tax community wrong, who wrote it off as there being no chance, resulting in pretty much no-one pitching up at the Parliamentary hearings.

Minister of Finance, Tito Mboweni, announced in his budget speech on 26 February 2020, that Government will increase the cap on the exemption applicable to foreign employment income earned by South African tax residents from R1m to R1.25 million per year from 1 March 2020. This was welcomed by many, but the more astute have quickly computed that this barely makes up for the weakening of the South African Rand against the United States Dollar. This benefit has simply been more than eradicated by the weakening ZAR against other global currencies.

The build-up to what should have been an extra pond of revenue collection has seemingly backfired, and the increase of the exemption cap indicates Government’s attempt to persuade South Africans working abroad against cutting their ties with South Africa. The underlying message translates to “please remain a South African tax resident so that we can tax you”. The recent plunge of the Rand and taxable employer provided “benefits” will erode the foreign employment exemption, resulting in an unaffordable tax exposure for expatriates in South Africa.

Moving all theories aside and looking at the facts, expatriates mostly earn in USD and they will have a much higher South African tax burden, despite the increase in the exemption, due to the weakening of the Rand –

This gets to the core of why this remains on an inequitable tax regime, being that there is no recognition given for the actual costs incurred as an expatriate employee; so the tax applies for many at a higher rate than their true earnings.

The real critical issue for expatriates is the so-called “fringe benefits” which they receive when working abroad on a ship or at a remote site or location. Let’s be clear, these are not genuine fringe benefits for anyone who has visited these locations; yet they are defined as fringe benefits under our domestic tax law. Thus, whilst economically there are no real benefits being provided, the expatriate will be fully taxed on items such as accommodation, security, vehicle, drivers, medical facilities, evacuation and other insurances and flights home.

National Treasury and SARS are acutely aware of this issue and they know that expatriates were pleading for an exemption on various benefits, yet none has been announced and will clearly not be given. This is the one area where an understanding of the expatriate plight could have been shown. Under this regime, where one fails to proactively put the right tax planning measures into place, the only relief available for these expatriates are allowable deductions and Section 6quat foreign tax credit claims. This does not offer much relief when it comes to determining the actual tax exposure in South Africa. The section 6quat relief mechanism is also more limited than what many believes and a very complex tax computation.

Where does this leave the breadwinner and their families?

The focus on the South African working abroad, such as rotational workers and seafarers, confirms that they rank high on the radar of SARS. Even more so in these challenging economic times, SARS will keep a tight rein on the South African expatriates and their world-wide income. The expatriates who cannot claim relief by means of breaking their ties with South Africa and formalising the process through financial emigration or claiming relief under the Double Tax Agreements, have to carefully plan their tax affairs going forward as we will see SARS focusing on them as the new revenue providers.

There are also various tax scams doing the rounds, promising tax exemption which simply does not exist. A classic one is that you pay your whole salary to some unnamed offshore company and then a ‘dividend’ appears in your bank account, which is claimed to be tax free. This is a simple case of tax fraud, so one will need to see what SARS does about this and their strategies to stop this. 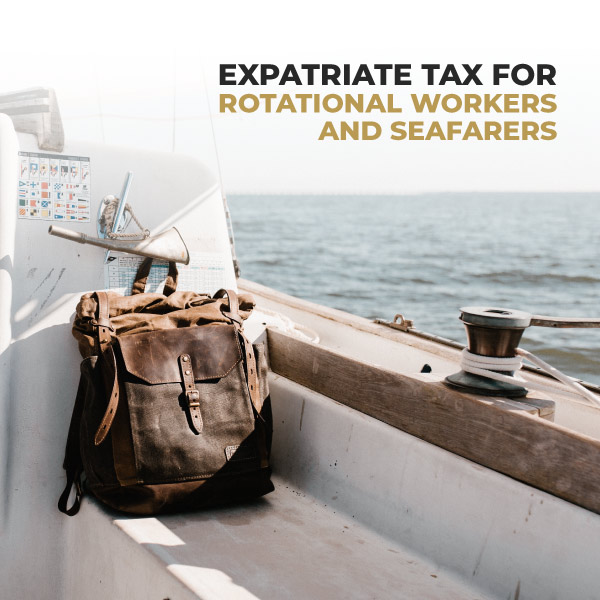 NEWS | EMPLOYEES OF LIQUIDATED COMPANIES MAY NOT SUFFER PAYE