OPPORTUNE TIME FOR SOUTH AFRICANS TO EMIGRATE TO MAURITIUS

The Mauritian government implemented several incentives that make Mauritius an attractive option for foreigners to live, work and invest in. Tarissa Wareley, an Immigration Specialist at Xpatweb, says that besides cutting the minimum investment needed for an occupation permit (OP) as INVESTOR, to half. The government also relaxed other entry requirements that make it easy for someone with a spouse and elderly parents to move to Mauritius.

“Under the INVESTOR scheme granting an Occupation Permit (OP) – which lets you reside and open a business in Mauritius – has been halved from $100,000 (R1.7 million) to $50,000 (R870,000). This investment remains under your control, invested in your business, with only 500 USD  (R8500) as the processing fees for the OP. If you have an OP, you can bring your parents and spouse into Mauritius as dependents without having to obtain work permits for them. The permits have also been extended from three to 10 years,” says Wareley. “Other OP options include schemes such as “professionals”, self-employed, and retirees, aimed as further easing of living and working on the rainbow island” she adds.

Wareley  believes her company has seen a rise in the number of enquiries from South Africans who are considering moving to Mauritius. “Those looking to move to Mauritius have been pleased to learn that the process has become more affordable, streamlined, and attractive to residents, entrepreneurs and business owners,” says Wareley.

Lead Tax Advisory of the corporate limb of Temple Group, Vandana Boolell, and Lead Corporate Advisory , Aditi Boolell, say that Mauritius’ tax system is one of the most efficient and linear, with a maximum tax rate of 15%, and with exempted income of up to USD$15 000 (R261 000) per annum. They confirmed that there are tax benefits for South Africans moving to Mauritius.

“The effective tax rates for individuals are well below those applicable to South Africa and other countries. An important difference is that Mauritian residents are only taxed to the extent of the money that they bring into the country. Any global income that isn’t sent to Mauritius won’t be taxed by the Mauritius Revenue Authority,” says Vandana Boolell.

Other key tax benefits include no withholding taxes; no capital gains taxes on property sales, sales of shares, or assets; no taxes on dividends or income; and all income being repatriable, with no caps on FOREX and with no limit on tenure.

Vandana Boolell says that there are a variety of tax as well as customs and duty benefits for companies operating out of Mauritius, with corporate tax being capped at 15% and the effective tax rates for companies being well below 15%.

“Freeport and export activity is capped at 3%, with export activity also being exempt from the country’s 15% VAT.  Mauritius also benefits from the various Free Trade Agreements like COMESA, SADC and CECPA, among others. Other incentives include tax holidays of up to eight years for companies in certain sectors, as well as headquarters of companies – under certain conditions – that move to Mauritius. Favourable tax policies and the newly announced relaxed immigration requirements means that it now makes more financial sense for South African businesses to set up shop in Mauritius,” concludes Vandana Boolell. 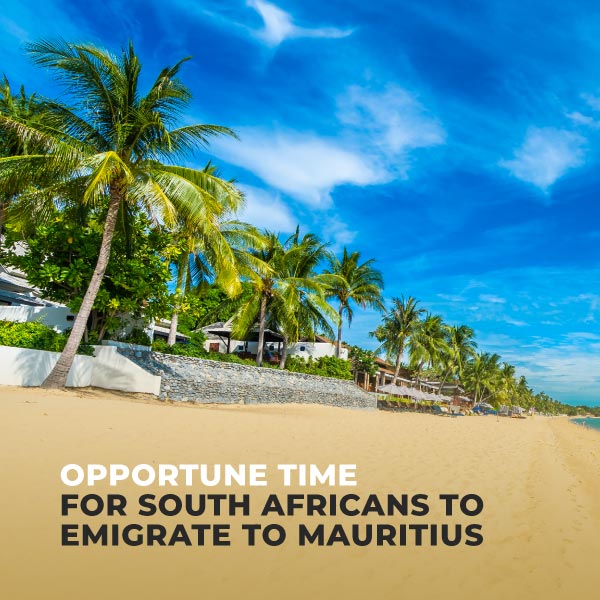 NEWS | THIS YEAR, SARS MAY ‘AUTO-ASSESS’ YOUR TAX RETURN: HERE’S WHAT...

NEWS | ECONOMIC CONTRACTION WILL SEE UNEMPLOYMENT SKY-ROCKET
Visit the Government Portal for the latest updates on COVID-19.
+
Scroll to top