Proposal for a regulatory framework for payroll deductions

You are here: Home1 / Latest News2 / Proposal for a regulatory framework for payroll deductions 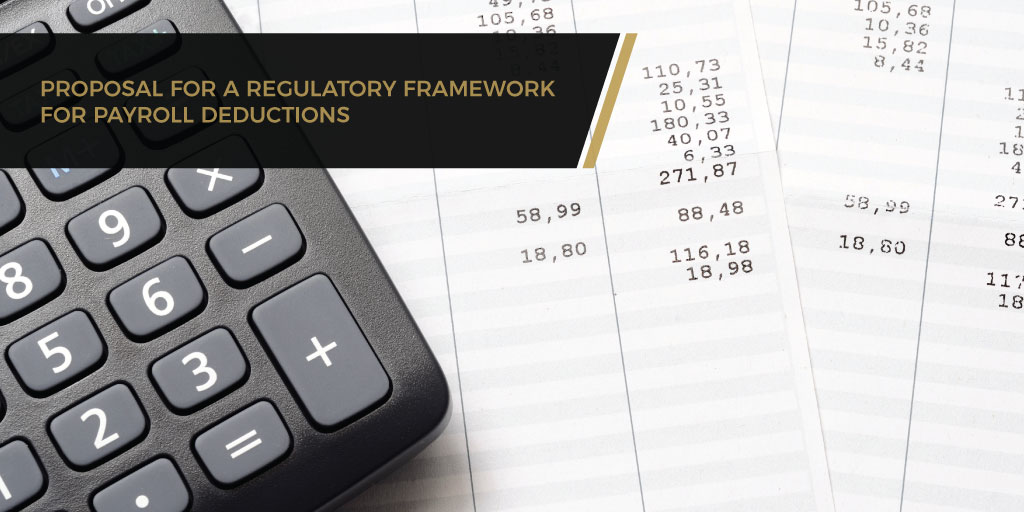 After becoming aware of an increase in payroll deductions in recent years, the South African Reserve Bank (SARB) and National Treasury have engaged in discussions with stakeholders on the creation of a regulatory framework to govern payroll deductions. The proposal was open for public comment until 30 April 2018.

The SARB and National Treasury want to implement a stable and effective payroll deduction regulatory framework that aims to benefit employees by protecting them from unfair lending practices, affords them the opportunity to access financing at reasonable rates, promotes savings and productive credit and minimises the risk of conflicts of interest. The regulatory framework further aims to be transparent, safe and efficient to sufficiently protect employees.

The SARB and National Treasury have proposed three options which will form the base of the proposed regulatory framework for payroll deductions.

Option 1:
Employers will have no access to voluntary payroll deductions. Only statutory, court order, collective agreement and arbitration award deductions will be allowed.

“This is the least complicated option and the playing field will be levelled as no preferential treatment can be given to certain creditors or institutions,” says Craig Rocher from Tax Consulting South Africa. Employees will also be protected against unauthorised deductions.

This option may affect employee benefit programs where employers are providing employees with financial assistance and employees may lose the cost-effective advantage of paying through payroll.

According to Rocher “this option allows for deductions that are beneficial to employees, such as their mortgage payments, savings and retirement annuities.”
This will require adjustments to payroll systems and certain financial institutions may feel disadvantaged when their deductions are not allowed.

Under this option, all parties will have equal right to deduct from an employee’s salary and there will also be improvements in employees honouring their financial obligations. Employers will have a choice in who gets paid from payroll and who doesn’t.

“Collection preferences may occur under this option as the employer will then need to decide the hierarchy of payments” according to Rocher. Employees may also be exposed to unfavourable contractual terms and it may be difficult for them to stop or dispute payroll deductions.

How will it affect employees?
Employees will be affected no matter which of the options is chosen in the end. “They may be subject to additional bank charges should voluntary deductions no longer be allowed, and it should be considered that many employees don’t have access to internet banking to make their monthly payments, thus creating a lot of additional administration for them” says Rocher.

However, the benefits should not be disregarded, as many employees are subject to unfair lending terms and unreasonable interest rates, leaving them with minimal take-home (net) pay.

The SARB and National Treasury will be taking the public comments received in April under consideration and the preferred regulatory option will be communicated to stakeholders in due course.

What are the regulatory framework options for payroll deductions?