SARS vs Reunert: How a Competently Drafted Contract Saved Millions

You are here: Home1 / Latest News2 / SARS vs Reunert: How a Competently Drafted Contract Saved Millions 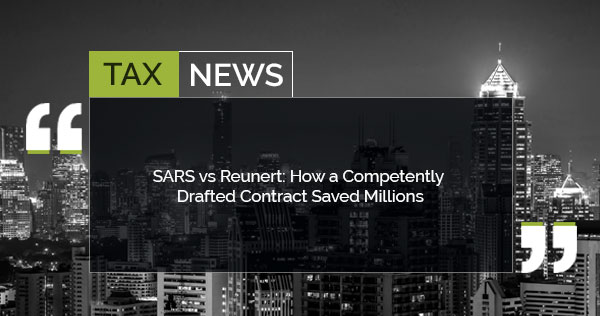 The recent matter of The Commissioner for SARS v Reunert Ltd highlights the importance of possessing an intimate understanding of contractual principles when drafting an agreement. In this case, SARS found itself on the losing end of a Supreme Court of Appeal judgment, handed down by the Honourable Cachalia JA on 22 November 2017, due to misinterpretation of certain clauses in a contract.

The agreement
When Nokia Siemens Networks (NSN, now known as Nokia Networks) decided to separate control of the rest of Southern Africa from Nokia Siemens Networks South Africa (NSN-SA), the business unit experienced a sharp decline in income. Consequently, Reunert Ltd, a local group with a 40% shareholding in NSN-SA, saw its dividend drop to unsatisfactory levels and therefore asked NSN to buy back its shares. NSN, however, recognising Reunert as a valued business partner with strong ties to its biggest South African customers, proposed an alternative.

NSN entered into a Sales Promotion Agreement (SPA) with Reunert whereby the latter was appointed as their sales promoter. In terms of the SPA, NSN calculates a hypothetical sales commission every six months from its total Southern African turnover, representative of Reunert’s previously-enjoyed dividends. Any current dividend paid by NSN-SA is deducted from the gross commission and the net commission accrues to Reunert. However, if the dividend is greater than the gross commission, Reunert does not receive any commission.

SARS dispute
For the 2008 and 2009 years of assessment, Reunert dutifully declared net commissions for taxation. SARS, however, asserted that the terms of the SPA entitled Reunert to the total commissions regardless of the subsequent deduction of the dividend. The authority therefore raised additional assessments for both periods (totalling a combined R80 million) to claim tax on the entire amount.

Because of this difference in interpretation of the SPA, Reunert sought relief from the Tax Court and was awarded judgment in its favour. SARS appealed the ruling and arguments were heard from both parties by the Supreme Court of Appeal. Ultimately, the honourable judge upheld the previous ruling in favour of the taxpayer and dismissed SARS’ plea.

Interpretation
The dispute hinged mainly on the wording of three clauses in the SPA. Clause 4.1 set out the rules for calculating the gross commission as a percentage of NSN-SA’s turnover, and was “subject to” clause 4.9. Clause 4.9 stipulated that the actual commission payable was arrived at by deducting any current dividend from the gross commission. Lastly, clause 4.10 enabled the sales revenue for each period to be converted from Euros to Rands based on the average exchange rate for each month for the purpose of calculating commission.

SARS argued that, in terms of clause 4.10, it was possible to calculate the gross commission on a monthly basis, making the commission due at the time of sale. They backed up this interpretation with a note from Reunert’s 2009 and 2010 annual financial statements which said that “NSN may pay a dividend to Reunert as a method of settlement of commission income.”

Reunert responded that because clause 4.1 was “subject to” 4.9, they were never unconditionally entitled to the gross commission and that the note from the financials was made in error.

Outcome
Although the court frowned upon the inconsistency of the note with the terms of the SPA, it agreed that Reunert’s interpretation of the contract’s clauses were unquestionably correct. This was further strengthened by the company’s testimonies and evidence on the background and implementation of the contract. SARS’ appeal was therefore denied.

The takeaway is that the terminology of contractual clauses cannot be isolated from their context. The court looked at three aspects of the entire agreement. First, it considered the meaning of the words within the contract, analysing specific terms individually. Second, it decided if the clauses, taken separately and as a whole, resulted in a valid commercial intention. Third, the court objectively reviewed the testimonies and evidence presented to assure itself that the agreement’s implementation accorded with its terms.

The most important principle here is that of contract drafting. Because the drafter of the SPA made clause 4.1 and clause 4.9 inseparable, the taxpayer saved R80 million. This is a perfect example of applying sufficient preparation and employing drafters with extensive contract and tax knowledge.