MUST YOU SUBMIT A TAX RETURN TO SARS?

Due to the COVID-19 pandemic and the restrictions implemented, the South African Revenue Service (“SARS”) has pushed back the 2020 tax season by two months. The 2020 tax season will now open on the 1st of September 2020, and closes on the 16th of November 2020, for online submissions, and 22 October 2020, for branch filings. The changes were made to ease the administrative burden of submitting a tax return, thereby encouraging compliance.

Some respite for South Africans abroad?

The changes provide more time for South Africans working abroad to get their tax affairs in order, failure to do so means they may fall foul to the new expat tax law coming into effect from 1 March 2020. Majority of these taxpayers have never submitted a tax return since leaving The Republic and are reaching out for guidance. Others have no intention of returning to South Africa but never followed correct exit procedures when leaving South Africa, which includes paying one’s “exit tax”  and formally changing one’s status to “non-tax resident” with SARS and the South African Reserve Bank (“SARB”). Often in these cases the taxpayer can find themselves remaining tax resident of South Africa.

A word of caution: tax law is more complicated than you think

We have found many advisors cropping up on social media dangerously saying that South Africans working abroad are not tax resident. However, we strongly rebut these blanket statements as negligent and misleading, as they are often made without looking at a taxpayer’s personal circumstances nor correctly applying both South African tax residency tests. One must clearly understand that the consequences of not following formal exit procedures nor correctly applying Double Tax Treaty relief ultimately means that one remains a tax resident of South Africa. If these advisors had ever been to Tax Court to represent a client, they would know that the taxpayer is guilty until proven innocent and that the burden of proof, unfortunately, weighs heavily on the taxpayer.

We strongly encourage due diligence is followed when it comes to something as important as one’s tax affairs.

In the Government Gazette dated 3 July 2020, the Commissioner SARS invoked the provisions of section 25 of the Tax Administration Act and specifically noted individuals who were required to submit tax returns for the 2020 tax year assessment.

The general rule is that natural persons whose gross income exceeded the 2020 income thresholds are required to submit a tax return. However, persons whose gross income that consisted solely of remuneration paid or payable from one single source, which does not exceed R500,00.00 and employees’ tax has been deducted or withheld in terms of the deduction tables, are not required to submit a return for the 2020 tax year of assessment.

In terms of the above, the exclusion would not apply to individuals whose gross income:

In addition, section 3(2)(c) states the above exclusion does not apply to natural persons who received any amount or who has an amount accrued to them in respect of any services that they rendered outside of South Africa.

Consequently, South African tax residents who received income due to services that they rendered outside of South Africa will still be required to submit a tax return even where their gross income for the 2020 tax year of assessment does not exceed R500,000.00. Such individuals will be required to declare their foreign employment income and thereafter claim their foreign employment income exemption in terms of section 10(1)(o)(ii) of the Income Tax Act, if applicable.

South African tax residents abroad must therefore ensure that they do not attempt to bypass the law by claiming that their gross income consists of remuneration that is below R500,000.00 as they are still required to and must submit a tax return in terms of the Schedule as well as in terms section 25 of the Tax Administration Act.

A head in the sand approach must go out the window

With further laws being implemented to strengthen SARS’ revenue collection plans in the near future, optimum compliance of tax profiles should be the objective of all South African expatriates to ensure that they remain on right side of the law. 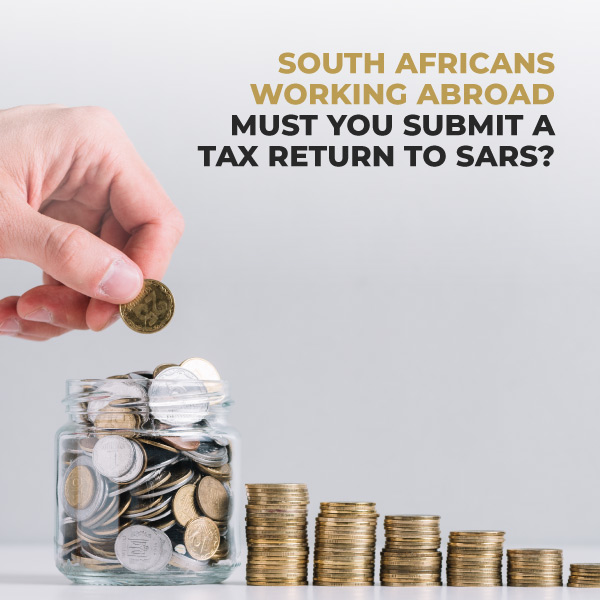 NEWS | THE “DISCREPANCY” SMS FROM SARS – WHAT SHOULD YOU DO?