It is not uncommon that, on an informal basis, a legal practitioner would be asked for a view on a legal matter that a particular person is facing with at the time. This may happen in a social gathering or some or other informal setting where there is no formal relationship between the practitioner (qua legal practitioner) and the person seeking the advice (as client) in respect of the matter concerned. The same could also happen in the offices of the law firm where someone seeks to ‘just run something by you’ or ‘bounce an idea off you’.

This is a common occurrence from which a number of possible questions arise, including:

These are questions, which some may argue are too remote to even seriously consider, taking into account the everyday interaction legal practitioners have with members of society in general. The judgments handed down by the courts in other jurisdictions lead me to argue that these questions must be considered by South African legal practitioners and that liability may well arise for legal advice given informally.

Social interaction with clients and members of society in general is part of every legal practitioner’s life. It may not be possible to avoid being faced with questions of law or requests for a view on a legal subject in every social or informal setting.

Though I have not been able to find any South African cases – where the question of whether or not there is any liability on the part of a legal practitioner giving advice on an informal basis – there have been a number of cases in other jurisdictions internationally where the courts have had to deal with this question. It is important that the views of the courts in the other jurisdictions are considered, as a South African court can be called on to adjudicate on this question and will have regard to the foreign decisions.

Selected cases from foreign jurisdictions are highlighted below.

Malcolm Heath of the professional indemnity insurer Lawcover (in a video clip appropriately titled: ‘Is There Advice on the Menu?’ https://lawcover.com.au, accessed 18-2-2019) comments that it is important that legal practitioners separate social activities from formal legal advice and suggests that file notes be made of all discussions with clients.

The importance of making and keeping notes of all discussions with clients cannot be overemphasised. The facts of this case show that this will be difficult in the event that the discussion takes place in an informal setting like a lunch (or even a braai or at a golf game in the South African context). With no record of the discussion or the advice given, the legal practitioner will be on the proverbial back-foot in defending a professional indemnity (PI) claim or even an inquiry by the regulator in these circumstances.

I have also not been able to find a specific case in the UK where this question was considered.

In the matter of Howes v Hinckley & Bosworth Borough Council [2008] UKEAT 0213-08-0407 an employee sought the disclosure of legal advice given to her employer. The employee argued that the legal practitioner from whom the advice was sought was acting as an employment consultant and not as a legal practitioner when the advice was given to her employer. Her contention was thus that legal professional privilege could not be claimed in these circumstances. It was found that despite the fact that the advice was not given in the capacity as a qualified solicitor, it did attract legal privilege. Peter Steel, a legal practitioner in the UK, is thus of the view that because legal professional privilege applied in these circumstances, the door is open for professional obligations to arise as well (‘The dangers of giving informal advice’ https://blogs.lexisnexis.co.uk, accessed 20-2-2019).

Caparo Industries PLC v Dickman [1990] UKHL 2 is a leading English case on the test for a duty of care. The House of Lords, following the Court of Appeal, set out a three-fold test holding that, in order for a duty of care to arise in negligence –

In Togstad v Vesely, Otto, Miller and Keefe 291 N.W.2d 686 (Minn. 1980), Mr Togstad, the first plaintiff, suffered from severe headaches caused by a large aneurism. His wife, Mrs Togstad, the second plaintiff, met with a legal practitioner, Mr Miller, regarding her husband’s condition. Neither of the plaintiffs were acquainted with Mr Miller or his law firm prior to the consultation. Mrs Togstad testified that she told the legal practitioner ‘everything that happened at the hospital,’ including certain statements and conduct from the nursing staff that had raised her concerns. Mrs Togstad had not brought any medical records with her to the consultation. Mr Miller had made notes and asked a number of questions during the consultation, which lasted between 45 minutes and an hour. Mr Miller expressed doubt about the prospects of success in the case but indicated that he would discuss the matter with his partner. The plaintiffs heard nothing further from Mr Miller and assumed that his view on their prospects of success remained unchanged. No fee arrangements were discussed, no medical authorisations were requested, nor was Mrs Togstad billed for the interview. The plaintiffs successfully sued the attorney for the losses suffered as a result of missing the prescription date for their claim. The court made a number of interesting remarks on the attorney client relationship, including that:

‘In a legal malpractice action of the type involved here, four elements must be shown: (1) that an attorney-client relationship existed; (2) that defendant acted negligently or in breach of contract; (3) that such acts were the proximate cause of the plaintiffs’ damages; (4) that but for defendant’s conduct the plaintiffs would have been successful in the prosecution of their medical malpractice claim. See, Christy v. Saliterman, 288 Minn. 144, 179 N.W.2d 288 (1970).

Under a negligence approach it must essentially be shown that defendant rendered legal advice (not necessarily at someone’s request) under circumstances which made it reasonably foreseeable to the attorney that if such advice was rendered negligently, the individual receiving the advice might be injured thereby. See, e.g., Palsgraf v. Long Island R. Co., 248 N.Y. 339, 162 N.E. 99, 59 A.L.R. 1253 (1928). Or, stated another way, under a tort theory, “[a]n attorney-client relationship is created whenever an individual seeks and receives legal advice from an attorney in circumstances in which a reasonable person would rely on such advice.” 63 Minn.L.Rev. 751, 759 (1979). A contract analysis requires the rendering of legal advice pursuant to another’s request and the reliance factor, in this case, where the advice was not paid for, need be shown in the form of promissory estoppel. See, 7 C.J.S., Attorney and Client, at 65; Restatement (Second) of Contracts, at 90.’

How to avoid possible liability for informal legal advice

Legal practitioners can avoid possible liability by avoiding ‘off-the-cuff advice’ by politely explaining to the person seeking the opinion that advice can only be given formally after a proper instruction is given and all the facts and legal issues are properly considered. Where the question involves an area of law outside of that in which the legal practitioner normally practices, inform the person accordingly.

Also, remember that if your defence in an action will be that you were not providing a legal service, this will be taken into account in assessing whether or not you will be indemnified under the Legal Practitioners’ Indemnity Insurance Fund NPC (the LPIIF) Master Policy. A claim arising from advice that was not part of the provision of legal services will not be indemnified. The policy will only respond to claims brought against an insured legal practitioner (see clauses XVI, 5 and 6) arising out of the provision of legal services. Legal services are defined in the policy (clause XX) as ‘[w]ork reasonably done or advice given in the ordinary course of carrying on the business of a Legal Practice in the Republic of South Africa in accordance with the provisions of section 33 of the Legal Practice Act’. A copy of the Master Policy can be accessed at https://lpiif.co.za.

Though it may be socially impolite, legal practitioners should, as far as possible, avoid giving legal advice in informal or social settings. Displaying your expansive, impressive legal expertise in a social engagement on matters where you do not have all the relevant facts (and the environment is not necessarily conducive to proper interrogation of the issues) may improve your social standing with the immediate audience, but may put your professional integrity and all you have worked for at risk. 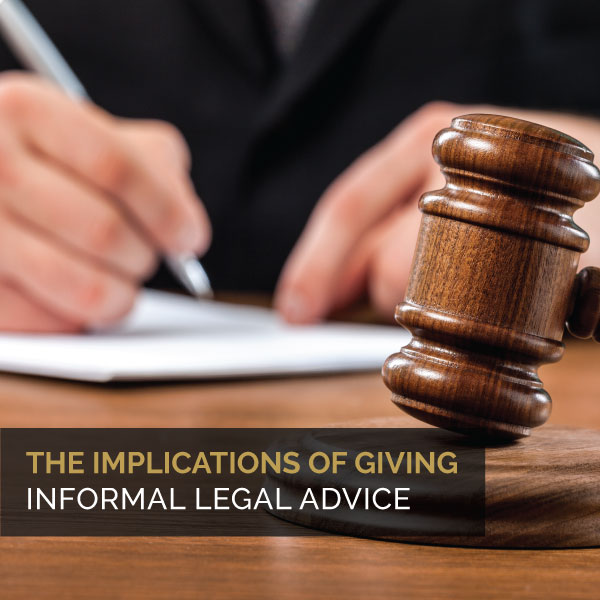