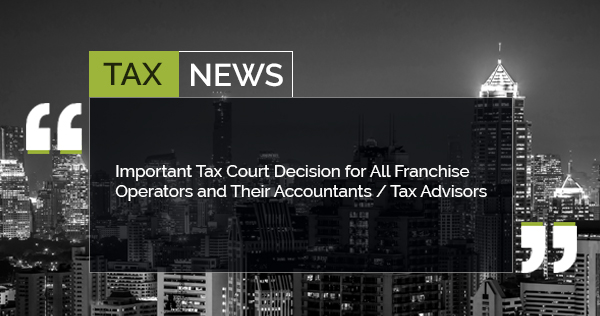 Fiscal law has business-critical provisions which allow for a business to deduct certain expenses which have not yet been incurred, but will be incurred in future. These special rules have very limited application, but when they do apply, they can make all the difference between a sustainable or a failed business. In a very important Tax Court decision, the question was asked whether such future franchisee costs to be incurred on franchisor-required refurbishments may be claimed, albeit that they have not yet been incurred. The Tax Court had some good news for all the franchise holders in South Africa, which will no doubt assist them in planning their taxes better and stimulate their growth.

The case of B v Commissioner for the South African Revenue Services (IT14240) [2017] ZATC 3 (“B v C:SARS”), delivered on 3 November 2017, not only clarifies the correct interpretation of section 24C, but is also very important for franchise operators and the manner in which they recognise income from refurbishments.

Following income having accrued to the taxpayer in terms of the franchise agreements, the taxpayer will use this income to finance its future expenditure when the franchisor determines that the restaurants require renovation. The taxpayer accordingly sought to claim an allowance under section 24C of the Income Tax Act, No. 58 of 1962 (“the Act”) for such expenditure.

‘…to upgrade and/or refurbish the Restaurant at reasonable intervals determined by the Franchisor to reflect changes in the image, design, format or operation of … [the franchisor’s restaurant chain] … from time to time and required of new … franchisees subject to approval by the franchisor of detailed plans and specifications for all construction, repair or refixturing in connection with such upgrading or remodelling…’ [emphasis and insertion added]

SARS, however, held the view that the deductions should not be allowed on the basis that, amongst others:

On the basis of SARS having disallowed the taxpayer’s deductions under section 24C of the Act and also due to the additional assessments raised by SARS being inaccurate in the taxpayer’s views, the taxpayer approached the Tax Court on appeal.

This judgment, therefore, deals with the Tax Court’s decision on appeal, where the Tax Court was accordingly tasked with ruling on: (i) whether income, received by the taxpayer/franchisee from its meal sales to customers, accrues directly from the taxpayer’s franchise agreement with the franchisor; and (ii) whether the expenditure required to refurbish or upgrade is incurred by the taxpayer ‘in the performance of the taxpayer’s obligations under such contract’, as contemplated in section 24C of the Act.

Furthermore, the taxpayer argued that the use of the words “subject to” in the clause cited above do not render its obligation to upgrade the restaurants as conditional.

After hearing arguments advanced by both parties, the Tax Court held that, as per ITC 1667, there does not physically have to be one contract document in order to give rise to the section 24C benefit. With regard to the facts in casu, the court held that, while there may be different parties involved, in the form of, for example, the customers who purchase the meals from the taxpayer’s restaurants, the franchise agreement and the meal sales to customers were found to be “inextricably linked”, “not legally independent and separate” and, therefore, the income was earned under the same contract as the taxpayer’s future expenditure, as required by section 24C.

The court also held that the words “subject to” do not render the unconditional primary obligation of upgrading the restaurants as now being conditional; this obligation remains regardless of the manner in which that obligation is to be performed (namely, with the franchisor’s prior approval).

Accordingly, the court agreed with the taxpayer and the additional assessments raised by SARS for the 2011 to 2014 years of assessment were ordered to be set aside by SARS.

The court specifically notes that there are no hard-and-fast rules that apply across all industries and to all cases when ascertaining if the provisions of section 24C have been met.

However, in the instance of franchisees, it is clear that where a franchise agreement (which is the means by which the franchisor earns income) clearly sets out an obligation to incur future expenditure in order for the franchisee to earn income, such expenditure may very well fall within the beneficial parameters of the section 24C of the Act.