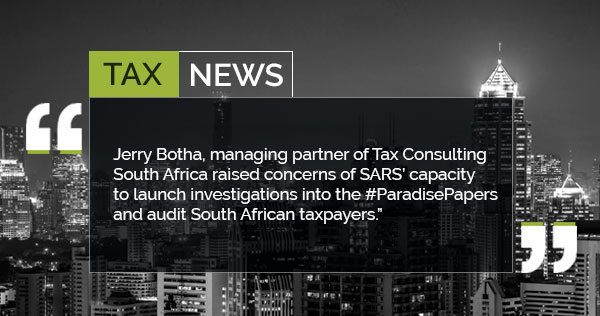 Johannesburg – The #ParadisePapers leak exposes the “feeble” political attempts to stop tax cheats, says a spokesperson for Oxfam, a confederation which focuses on poverty alleviation.

The data leak from offshore law firm Appleby Global Group Services on Sunday exposes a list of its clients’ offshore accounts. Among the corporates named is Glencore, and SA firms Illovo Sugar and Shanduka, which Deputy President Cyril Ramaphosa founded and had a stake in until 2014, Bloomberg reported.

In a statement on the leaks, Oxfam’s tax policy adviser Susana Ruiz said: “Paradise Papers exposes our leaders’ feeble attempts to stop tax cheats. Politicians’ tough talk has translated into weak reforms under pressure from big business and the super-rich.”

Tax evasion has contributed to the persistence of poverty and inequality, she explained. “Corporate tax dodging alone costs poor countries at least $100bn every year – enough money to provide an education for 124 million children and prevent the deaths of at least six million children,” she said.

Ruiz called for political leaders to work together to establish a global tax haven blacklist to end tax secrecy. The super-rich should pay their “fair share” of tax, she said. Further new tax reforms should be introduced to rebuild a tax system in the interests of the majority and not the few.

“Governments should also establish national public inquiries into the allegations made by #ParadisePapers to identify how national laws can be tightened or reformed to prevent tax dodging,” she said.

What SA is doing?

In an emailed response to Fin24, South African Revenue Service (SARS) spokesperson Sandile Memela said that the tax authority was working with its treaty partners on the matter, as it had done with the Panama Papers. “SARS will continue to collaborate with other tax and customs jurisdictions, and will use the tools at its disposal to ensure that South Africa’s tax laws are complied with,” he said.

SARS ran its Special Voluntary Disclosure Programme from October 1, 2016 and ended on August 31, 2017. It was an opportunity for taxpayers to declare hidden assets or income that previously had been undeclared. This programme was offered ahead of the first automatic exchange of Information (AEOI) between tax authorities in September 2017.

As part of the Common Reporting Standards, financial institutions are required to report information relating to financial accounts they hold for non-resident taxpayers to their respective tax authorities.

“This information is then automatically exchanged between participating tax authorities each year in order to tackle cross-border tax evasion and assist with domestic tax compliance,” Theresa Bezuidenhout one of SARS’ communication specialists said in an opinion piece on the SVDP.

In September SARS was part of the more than 90 jurisdictions which took part in an automatic exchange of third party information. SARS so far has exchanged information with 50 jurisdictions.

By the August 31 deadline for the SVDP, SARS had received 2002 applications from over 2 000 taxpayers. Of these 327 were finalised, amounting to R1.16bn in tax liabilities, and of which R1.02bn was recovered, Bezuidenhout said.

Joon Chong, partner of Webber Wentzel’s tax team explained that SARS still has an ongoing Voluntary Disclosure Programme (VDP) where they can continue to make disclosures. The longer taxpayers wait to make disclosure then the greater the penalty that is imposed will be.

Speaking on the leak, Chong explained that it is not a contravention to have an offshore account.

“Millions of South Africans invest overseas and do so through the correct procedures and means,” she told Fin24 by phone on Monday.  One can have a Foreign Investment Allowance of up to R10m a year. Or some taxpayers may have regularised their offshore investments by declaring it through the SVDP.

Those listed are not necessarily in trouble. “Just being named does not mean you are in contravention of the law,” she emphasised.

The next step is for SARS to use its “extensive powers” to request relevant information from South African taxpayers.

The problem is that this requires capacity on SARS’ part and it could become a long process. Chong said this process could take a number of years. Apart from recovering tax revenue, SARS will impose penalties for non-disclosure, she said.

When asked if South African tax authorities are doing enough, Botha said that the only way to collect more taxes is if the same culture as the US’s Internal Revenue Service is adopted. With these authorities, taxpayers cannot take the risk of not paying. “We have not got that culture in SA… I do not know how you change the culture”

When asked if the compliance problem is linked to high tax rates, Botha said that compared to other countries, South Africa’s rates are not as high.

The problem is that in other countries with higher rates, taxpayers also get deductions. In the US, people get tax breaks if they buy property.

The other reason for tax avoidance is the lack of service delivery, he explained. In addition for having to pay for private security, medical aid and tertiary education, South Africans also have to pay taxes.

However, Thembinkosi Dlamini, taxation public finance and economic specialist at Oxfam, said that the service delivery argument is not relevant.

Those implicated in the leaks are the super-rich, who do not use public services, he said. “They will not use public transport, or public hospitals, so that argument is irrelevant.”

Important Tax Court Decision for All Franchise Operators and Their Accountants...