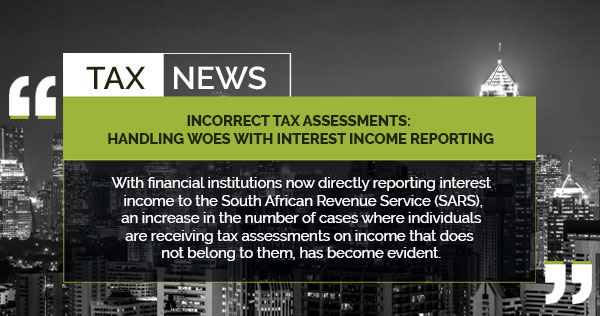 With financial institutions now directly reporting interest income to the South African Revenue Service (SARS), an increase in the number of cases where individuals are receiving tax assessments on income that does not belong to them, has become evident.

Often, the reason is a miss-match of information where SARS compares the income on your tax return with third-party financial information and notes undisclosed income. This gives the SARS official the legal basis to raise an additional tax assessment. However, the real culprit seems to be the technology where taxpayer information gets mixed-up, which makes pinning down who is at fault rather challenging.

Third parties are required by law to report financial information to revenue authorities. A good example is your IRP5 certificate where SARS compels your employer to report your income directly to them. From as recently as January 2018, the same is happening with interest, dividends and other financial transactions, which are being reported to SARS from across the globe.

This has given rise to speculation that in the foreseeable future, a tax return may even not be necessary, as SARS would electronically have access to everything already. However, as personal taxes are becoming more digital, growing pains especially for the uninformed taxpayer, can be expected.

Ignorance is a plan, but not a good one
Taxpayers are factually treated as guilty until proven innocent and with our courts actively enforcing extremely strict deadlines on tax disputes, there have been many cases in South African tax law where a taxpayer should not have been assessed, but missed a deadline. Thus, the mistake became final and the taxpayer was required to pay the tax. It is t therefore important to act immediately when finding an incorrect tax assessment.

In this case, it is wise to take a formal and legal step. Merely calling SARS or your tax practitioner who will tell you that he/she has spoken to SARS is not sufficient. The formal approach is set out in Rule 6 of the rules promulgated under section 103 of the Tax Administration Act, No. 28 of 2011, where a document is prepared to SARS calling upon them to provide reasons for the tax assessment.

Where SARS has attributed, for example, interest income reported from financial institutions to you, they will tell you in their response from what accounts and the amounts involved. SARS will, however, only provide this detail where you have correctly adhered to Rule 6; including the time periods set out in this Rule for asking for the reasons.

Once you have received these details from SARS and you have established that there is indeed a miss-match of information, you will still need to prove that the income is not yours.

You only have one chance to challenge SARS
Where the case is not resolved, taxpayers are legally tied to object all the way to the tax court. The evidentiary “pudding” for the taxpayer is therefore the formal objection, which is also another formal legal step required by Rule 7 of the Rules. The formal objection under Rule 7 would need to set all the grounds upon which the taxpayer does not agree with the tax assessment, together with documents setting out proof.

Taxpayers should include the right mix of ingredients in their objections to prove that the income is not theirs, this includes affidavits from financial institutions, the taxpayer himself and/or any other person with personal knowledge that the income is not the taxpayer’s. Where this is done properly, taxpayers can be sure to have a new assessment issued. This time being with a more accurate representation of income attributable to them.