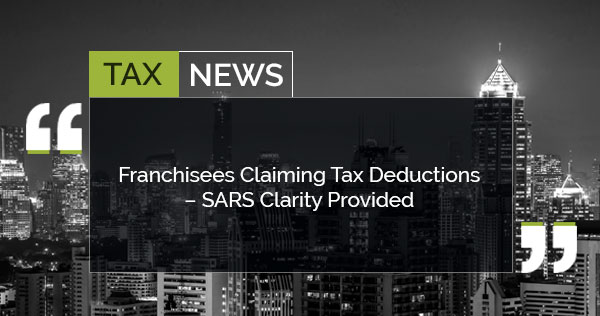 Franchisees have long battled with the tax deductibility of an initial fee paid under a franchise agreement. Depending on the nature of such fee, various provisions in the general deduction formula may find application. For example, where the initial fee is not capital in nature, it may be deductible under section 11(a) of the Income Tax Act, No. 58 of 1962 (“the IT Act”) or under sections 11(gC) or 11(f)  of the IT Act if the fee is capital in nature.

SARS, in Binding Private Ruling 285 (“BPR 285”), has now afforded some perspicuity as to when the initial fee is specifically deductible under section 11(f) of the IT Act. This ruling follows the recent Tax Court decision which also impacts franchisees; namely, B v Commissioner for the South African Revenue Services (IT14240) [2017] ZATC 3.

In general terms, section 11(f) affords a taxpayer with an allowance where a premium or consideration is paid for the right of use or occupation of an asset and where such asset is used for the production of income. Section 11(f) does not, however, include amounts paid by a taxpayer for the total acquisition of the asset.

In the franchise agreement, it is specifically noted that the marks, system property and associated goodwill remain the exclusive property of the franchisor, thereby only granting the franchisor a right of use of same.

Both the initial fee and the renewal fee paid by the franchisee were held to be fully deductible in terms of section 11(f) for the duration of the initial period and renewal period, respectively. Interestingly, SARS qualifies the ruling by stating that it does not express a view on the “accuracy of the pricing of the initial fee that pertains to the intellectual property rights contemplated in sections 11(f)(iii) and the imparting or undertaking to impart any knowledge directly or indirectly related to such intellectual property rights contemplated in section 11(f)(iv)”.

While BPR 285 is welcomed, franchisees should still seek expert assistance to ensure that they do not fall within the parameters of SARS’ qualification in the ruling. This would have dire consequences for franchisees and may result in the deduction under section 11(f) either being reduced substantially or disallowed in its entirety.