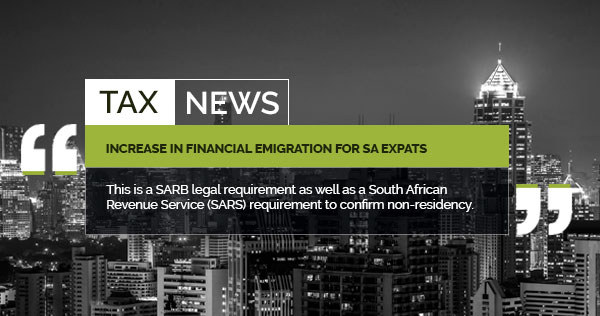 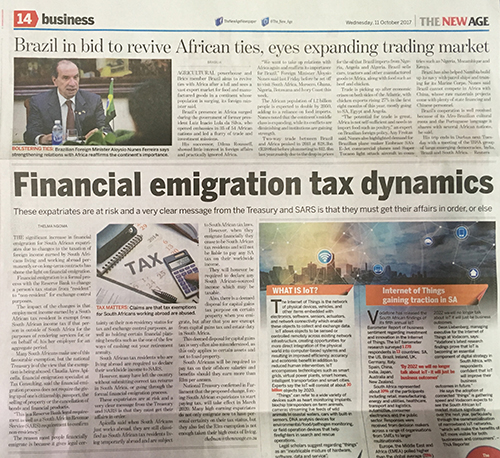 Recent changes to the taxation of foreign income earned by South Africans living and working abroad permanently or on long term contracts have shone the light on financial emigration.

Financial emigration is a formal process with the South African Reserve Bank (SARB) to change your tax status from “resident” to “non-resident” for exchange control purposes.
Claudia Aires Apicella, financial emigration specialist at Tax Consulting, says the financial emigration process does not require the giving up of one’s citizenship, passport, the selling of property or the cancellation of bonds and financial products.

This is a SARB legal requirement as well as a South African Revenue Service (SARS) requirement to confirm non-residency.

It is based on the question whether South Africa is still a person’s usual or principle residence, thus more aptly in comparing to other countries, one’s real home. The reason most people financially emigrate is because it gives legal certainty on their non-residency status for tax and exchange control purposes, as well as holding certain financial planning benefits such as the one of the few ways of cashing out your retirement annuity.

South African tax residents who are living abroad are required to declare their worldwide income to SARS. However, many have left the country without submitting correct tax returns in South Africa, or going through the formal financial emigration process.

“These expatriates are at risk and the very clear message from National Treasury and SARS is that they must get their affairs in order.” Apicella explains that when a South African just works abroad, they are still classified as a South African tax resident living temporarily abroad and are subject to South African tax laws.

The proposed change to the taxation of foreign income earned by South African tax residents has brought about a significant increase in financial emigration applications, says Aires.

South Africans will be required to pay tax on their offshore salaries and benefits should they earn more than R1 million per annum. “National Treasury confirmed in Parliament on the 14th September 2017 that the proposed change, forcing South African expatriates to start paying tax, will proceed and take effect in March 2020. Many high earning expatriates do not only emigrate now to have personal certainty on their tax status, but they also feel the R1m exemption is not enough taken their high cost of living.”

She says the more complex part of financial emigration is getting the Emigration Tax Clearance Certificate. This is part of the process where SARS notes you formally on record as non-resident.

When applying for the tax clearance certificate it may show that there are tax returns outstanding when there has been non-compliance in prior years. The outstanding returns will have to be brought up to date before SARS will issue the required certificate. Especially where you retrospectively financially emigrate, you must ensure there is alignment between your tax position and fiscal status.