The Canary in the Coal Mine for Taxpayers 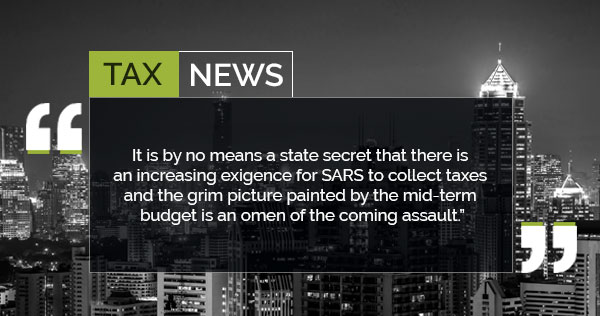 With the November tax deadline looming, it is almost needless to warn taxpayers of the torrid tax season awaiting them, writes Jean du Toit, attorney at Tax Consulting SA.
It is by no means a state secret that there is an increasing exigence for SARS to collect taxes and the grim picture painted by the mid-term budget is an omen of the coming assault.
As things stand, a symptom of the current tax environment is an unprecedented surge in audits, which, on the account of our clients have become more arduous, as SARS seeks to make up the shortfall by using the powers afforded to it under the Tax Administration Act more aggressively.
At the risk of leaving taxpayers utterly despondent, the storm clouds gathering in the form a Commission of Inquiry must also be pointed out. Whilst we can only speculate as to what the true motive behind the inquiry is, we can safely assume that this will intensify the already crushing pressure on SARS to collect taxes.
This latest development in the SARS chronicles is the canary in the coal mine for taxpayers, to brace for the assertive manner in which SARS will extract every morsel of tax money it possibly can in the coming months.
One can appreciate that South African taxpayers might feel that they have been dealt a rotten hand, especially since there are allegations of particular citizens of our country not paying their fair share. Although taxpayers cannot legally escape the proverbial mine in this instance, it cannot be expected of them to simply brave the storm and have SARS take the lead.

The approach
Taxpayers would do well to understand that the best way to negotiate the dreaded process of an audit, and to prevent the possible devastation of any assessments issued subsequently, is to avail themselves to the rights afforded to them by the law.
SARS has wide, but not unshackled powers and the moment SARS issues an assessment against a taxpayer, it is bound by the rules promulgated under the Tax Administration Act.
Taxpayers must be alive to the fact that the process following an assessment is strictly regulated by these rules, which affords them multiple mechanisms to ensure that the dispute process is conducted fairly.
The rules serve as the equalising factor in confrontations with SARS and can be an invaluable tool, if used appropriately. However, if not heeded properly, these rules are a double-edged sword that can be a taxpayer’s downfall.

The Canary in the Coal Mine for Taxpayers

Amendment of Schedule 2 of the Regulations of the Administration of Estates...

Don’t let an Audit Tax you
Visit the Government Portal for the latest updates on COVID-19.
+
Scroll to top